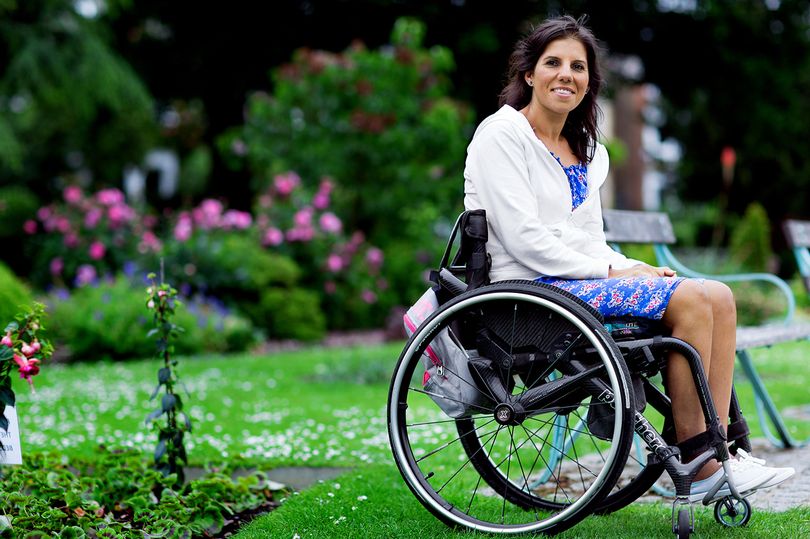 Yasmin Sheikh woke up one day paralysed from the waist down aged just 29 (Image: Teri Pengilley 2017)

I was 29 and life was exciting. I was working as a personal injury lawyer, was going out all the time and enjoying myself. I had a healthy lifestyle, exercised, watched what I ate, drank in moderation and had never experienced any health problems before.

It was March 2008 and I had just been away with friends for the weekend. The next day I had a bad pain in my lower back, but then the pain disappeared so I went to the gym. I went to my parents’ for dinner, but the pain returned and this time it was excruciating.

My mum got me a hot water bottle and again, the pain faded. She dropped me home and I went to bed. Luckily my phone was next to me on my bedside table. In the middle of the night I felt the urge to go to the toilet, but I couldn’t wee. I now know my bladder was paralysed.

I got up three or four times to wee and each time nothing happened, but my legs got weaker and weaker. I was falling down and started to feel unwell. By 7am I couldn’t even get out of bed. I could move my left leg a bit, but I couldn’t move the right at all. I was panicking. I rang my best friend and said, ‘I can’t move my legs’.

She is a very calm person, so the panic in her voice made me think, ‘S***, this is serious’. She said, ‘Yas, you’re scaring me’, and then I was scared. My parents called an ambulance. I remember the paramedics carried me down the stairs and took me to hospital. It all seems like such a blur now.

Dozens of scans didn’t reveal anything. I hadn’t broken anything or fallen, but doctors said that was worse, because there was nothing they could see to fix. After a week I became severely ill with a collapsed lung and pneumonia. I was in intensive care for a week and on 98% oxygen. I couldn’t even breathe.

I had weeks of tests, but to this day consultants disagree on what had happened. One has a ‘hunch’ I’d had a stroke of the spinal cord. It’s extremely rare and just bad luck. Another thinks I had transverse myelitis, an inflammation of the spinal cord, which usually develops after a mild illness. I did have a cold and cough beforehand, but you’d never think that could cause paralysis.

I still don’t know why it happened to me, but from that day I’ve never walked again. It’s an incomplete spinal cord injury, which means I can feel pressure. If I closed my eyes and someone touched my knee, I would know, and I can move a couple of toes. But I don’t feel hot and cold or the warmth of the sun.

After 29 years of learning your body’s signals, you have to rewire your brain. I was in hospital for three months and then had to have physio and learn how to use a wheelchair. If someone had told me at the time, ‘You’re never going to walk again’, that would have been harder. But no one said that. Over time, as the weeks go by without improvement, you start to realise.

There was no progress, and I worried about what the future held for me. It was hard to envisage a life – I didn’t even know anyone else in a wheelchair.

I used humour as my way of coping, but there were moments when I did break down. I was in physio once and remember being so exhausted. I just thought, ‘Screw this, I want my old life back’. I wanted to be talking about something trivial and planning nights out. I didn’t want to deal with this institutional life where you have to fight just to be able to move.

Going back to live with my mum and dad was hard. I had been living alone on the second floor with no lift, so that wasn’t an option. That was my independence, my freedom. My parents had to put a stair lift in. I couldn’t just pop downstairs for a glass of water, I was totally reliant on them.

My dad found it very difficult, while my mum is more practical and helped me to plan goals. We worked towards things like me getting a bus on my own. Even something little was a big deal. Although I soon realised everyone always wants to push you and offer help.

If I want help, I will ask for it. But I experience this about five times a day. Sometimes it’s an innocent offer, but once a woman said, ‘Can we swap places because I’d love to be pushed around all day?’ I was dumbfounded. Sometimes it’s really upsetting, and incidents have made me cry, but mainly I get irritated. And I dislike the term ‘wheelchair-bound’.

I gained the confidence to move into my own flat in January, 2011. It was frightening and I remember crying to a friend about how scared I was. I felt really alone. I first felt happy again when I had a housewarming party. Luke Hamill had invited himself to the party. Luke, 44, is also a wheelchair user and we’d met by chance at Waterloo Station a couple of years earlier.

My mum is obsessed with Casualty and Luke had a major part. My mum said, ‘There’s a really good-looking guy in it, he’s actually in a wheelchair, I’ve Googled him!’ I was fascinated with how disabled people are depicted in soaps, so I watched him on TV. When I recognised him at Waterloo I shouted loudly in my Essex accent, ‘Oh my God you’re in Casualty!’

He gave me his business card – he’s a trustee of Aspire, a charity which supports people with spinal injury and he wanted me to get involved, but I was newly injured and didn’t want to. Still, we became friends. When we finally got together in 2013, it was tough getting used to people staring and commenting. A couple both using wheelchairs is unusual, we can’t be anonymous.

In March 2015, Luke proposed on the top of the Royal Observatory in Greenwich. I was checking my Blackberry and wasn’t really interested, although he kept telling me to look at the view. Finally he said, ‘Will you marry me?’ I said, ‘Oh my God, are you joking?’

Our wedding in July was full of love and laughter. We have both been through a lot, but have come out of the other side. Life is good now, with lots of excitement for the future. I returned to my lawyer job 18 months after the injury, but I’d lost my confidence and didn’t have the passion for it.

I got involved with the Diversity & Inclusion board at work and found they were listening to me about how to improve things for people with disabilities. A disablity network was set up and I started to feel useful again.In 2015 I quit my job. Now I am a disability consultant, coach, public speaker and mentor. I’ve also joined Luke’s acting agency, VisABLE, representing disabled artists, and got a role in crime drama Gone on Sky Atlantic, starring The Walking Dead actor Lennie James (who wrote it). I had a few lines and adored the filming.I’d love to continue acting or be a presenter. I used to think you’d never have a presenter in a wheelchair, but now I think why not? There are lots of things I wouldn’t have done before my injury – I also wouldn’t have met Luke.I’ve always grappled with my identity in a wheelchair, but although I’ve found out things the hard way, I’ve been pushed in a different direction. I like who I am. This is my new normal.

Below is a short video about me:

Some other interesting articles written about me:

Yasmin wants to educate and reduce awkwardness around disability. Here are some on the most shocking or annoying things people have said to her since her injury…